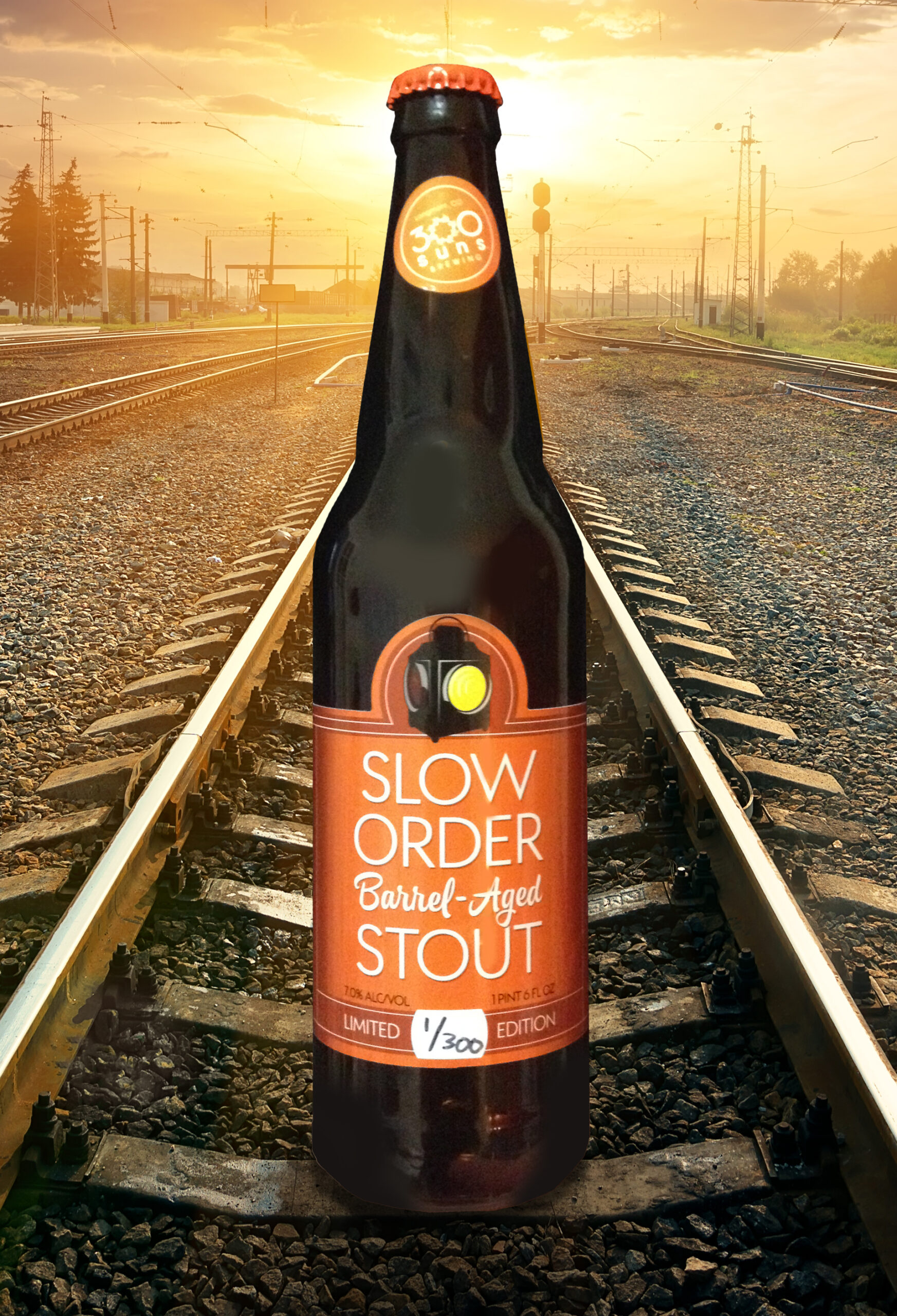 When we first opened our doors, and even before, bottling wasn’t even really on the to-do list.. We mentioned it from time to time in meetings, or in passing. Occasionally we would brave an utterance of “someday we might put this into a bottle.” It was a very distant hope.

The business of starting and running a brewery with a tasting room and now a small kitchen has always and probably will always take precedence in our list of priorities. Our love of this industry stems from wanting that connection to our customer which is so direct in the tasting room. Bottling our beers and sending them out into the world for STRANGERS to drink seemed so…well….not the intimate, connected, craft beer drinking experience we were after.

But eventually it was our customers that pushed us. It became a regular occurrence to hear “when are you going to be in my local liquor store?”

So, here we are. We took a leap. And let me tell you it felt like a big one at first. How in the heck are we going to afford the equipment and staff to get beer into a bottle, labeled and out to stores?

Turns out, it is actually a lot of work, but achievable. And, like everything we do, we wing it a little, beg and borrow what we can, ask a lot of questions before we start, and then we  build whatever else we need as cheaply as possible without sacrificing quality.

Our Slow Order Barrel-Aged Stout is aged in barrels that were purchased for us by two of our very generous customers (we call them “the Mike’s”). The barrels became available at a time that Mark was fighting the worst of his cancer, Dan was struggling with getting up to speed at the brewery and we were short handed and funded because of this. The Mike’s offered to buy these barrels for us. Let me type that again because of the amazing statement it is. These two customers BOUGHT the barrels for us. For nothing in return other than their names on the barrels. This is an amazing world folks.

The Mikes…(L and R, middle is our nephew, he isn’t in this story, nor is his name Mike, but he is a good kiddo)

So, we went about the business of using these glorious Whiskey Barrels that the good people at Woods High Mountain Distillery were gracious enough to sell us when they were done with them. And voila, out popped the delicious Slow Order Barrel-Aged Stout in 22 oz. bombers.

Okay, there was a lot more to it than that. Including, how does one exactly get the beer from the fermenter to the barrel to age? Or from the barrel into the bottles? People have done this before right? Right?

In any case, with lots of advice from others in the industry…ok let me stop there to mention…DO YOU KNOW HOW KICK ASS THIS INDUSTRY IS? We didn’t know exactly what we were doing. Granted we kinda knew what we were doing but there’s always this doubt. And it is little things like – “Oh, you should probably label those beers BEFORE the beer goes in them” – that are the things that you just don’t think about until you are in the thick of it. There are also big things we learned that I won’t share here because I don’t want to BLOW YOUR MIND with my new extensive bottling beer knowledge but lets just say it is an amazing industry we work in that we could get this kind of advice. Anyway, with lots of advice, we got started getting ready to bottle. (THANK YOUs to Gemini Beer Company, Echo Brewing and Wild Woods Brewery, who are all awesome people who make delicious beer.) 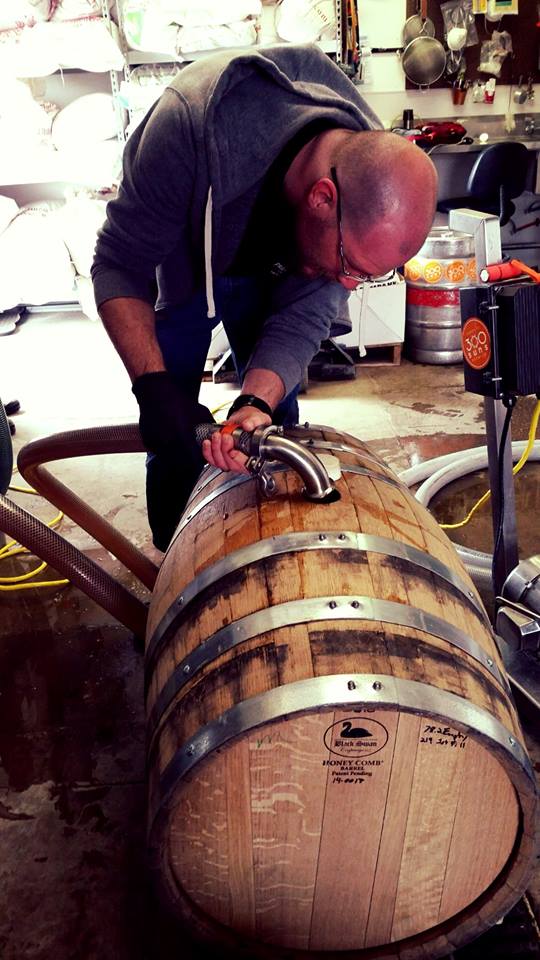 Did you know there are rules to follow when you design beer labels? In Colorado we don’t have to have our labels passed by the feds because we are distributing only locally, but we made them compliant anyway…for when we make it big (well, just in case). And ALSO, did you know that you might want to pay attention to which way the labels are rolled on to the roll? And that the printer might not ask you which way they go because they’ll assume you will tell them because you should know what you are doing? Anyway, if you ever decide to label stuff, think about that.

Dan crafted a cool handmade labeler after watching several videos online. It looked really cool. It would have worked great for a shorter label that didn’t have to make it perfectly straight all the way around the bottle (or if Jean wouldn’t have freaked out every time it was crooked.) It worked ok for ours, but Jean soon discovered that she was better lining the labels up by hand (yay Freshman year of college studio skills). Dan has plans for version 3.0. 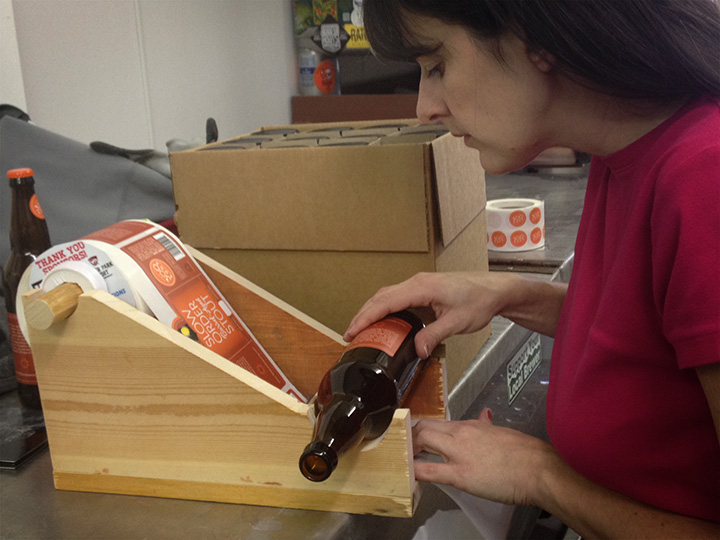 Dan made this bottle labeler with his own two little hands…and lots of tools. In fact, he made it twice.

But how to get beer INTO the bottles?

After asking around, we borrowed a very small bottler bottler for free…OK, this is another case of “Are you freaking kidding me? This industry is AWESOME!” I’ll leave their name off here so that they don’t get inundated with requests for free bottlers, but we weren’t the first that they did this for and it truly made the whole process less daunting knowing we didn’t have to lay out the money for that right off the bat (in case our bottled beers were so disappointing and people rioted in the streets and demanded we shut our doors…you never know, stuff happens.) 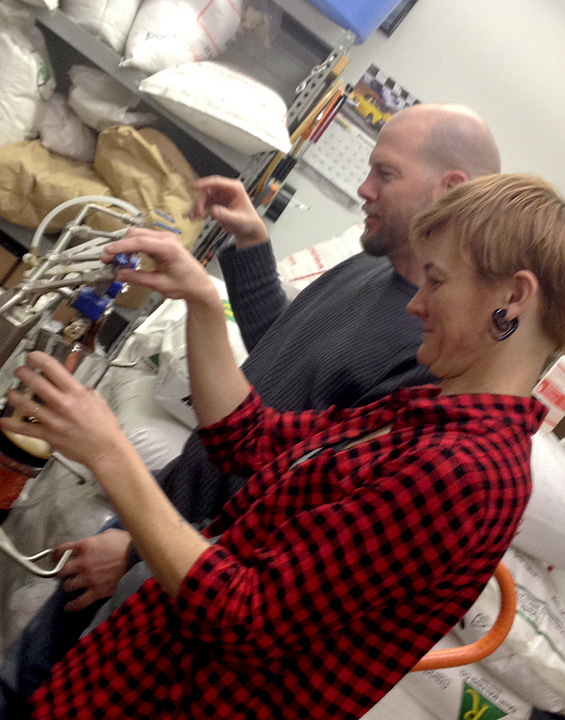 Four-head bottler. Not to be confused with a forehead bottler, which is a VERY specialized product unrelated to the beer industry.

All that was left was a bottle capper and oh my goodness, we had one from a homebrew purchase off Craigs List back in our homebrewing days. 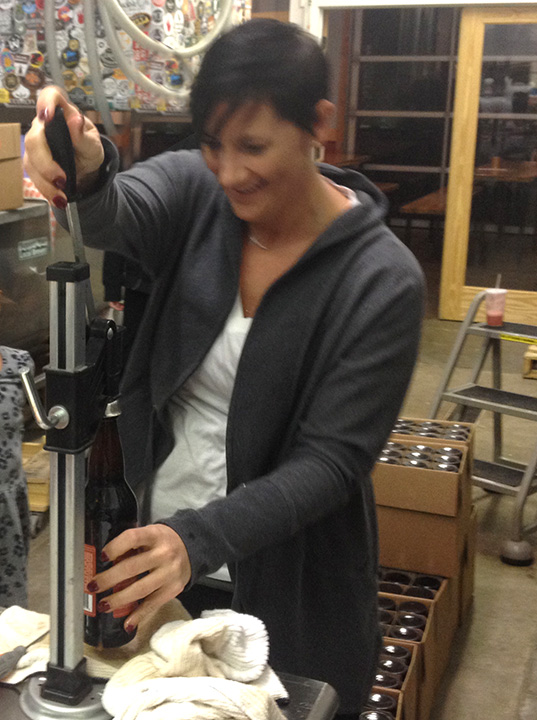 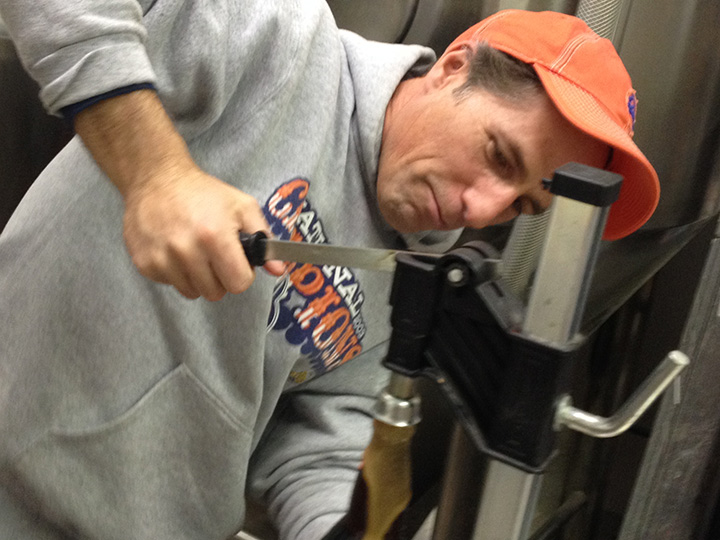 Oh and this very high tech SHARPIE MARKER, with which we hand-numbered each and every bottle:

Oh wait, not yet, first there was:

Why isn’t this beer carbonating?, crooked labels, thinking we did something wrong and didn’t have enough for 300 bottles (then realizing we were fine, phew), tricking our employees into spending “team building night” bottling beer…and also enlisting the help of children (no children were touching beer, but they make great labelers, cleaners and empty bottle carriers), gushing beer all over our shirts, drinking beer that gushed out of bottler as foam so it didn’t “go to waste”… 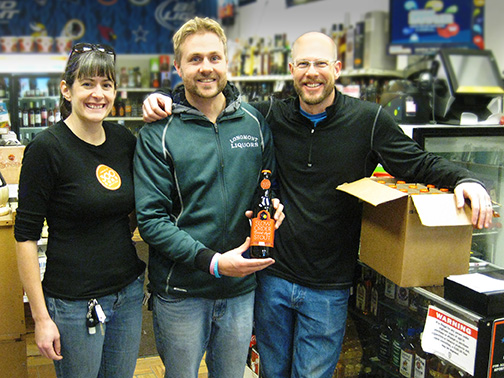 Then, voila! Bottled beer. And guess what? The experience has been more intimate and connected than we thought. Our friends our posting on social media how they bought their bottle at the store close to them. They are telling us how they plan to keep it for a year, or give it as a Christmas gift to a beer-loving friend, or take it home to their family over the holidays. We have re-connected with some great friends at local liquor stores who have thanked us for finally having bottled beers (who knew?!) 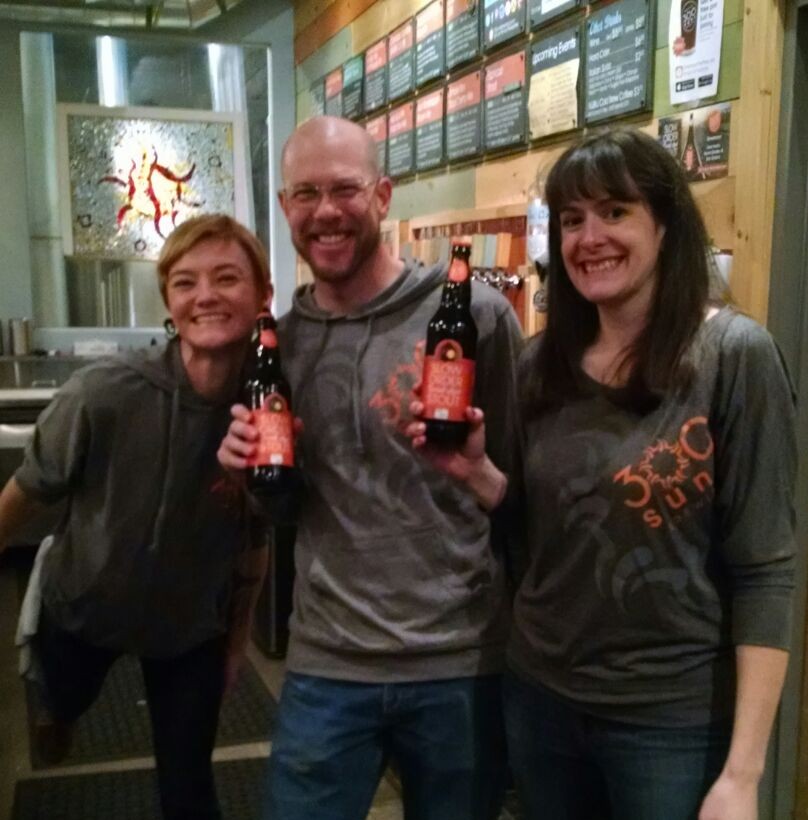 We hope you like it and buy it at your local store. (And if they don’t carry it, ask them to give us a call.) We worked really hard on it. And we hope to do it again real soon. Unless you are currently rioting in the streets, in which case, we have a few bottles of delicious beer here to hold us over…